I do not have clear vision at any distance.

Side effects of PanOptix IOL

"There is also a possibility that you may have some visual effects such as rings or circles (halos) around lights at night." - source: PanOptix website. Those potential IOL side effects were explained to me prior to surgery. I did not ask about "any other" visual side effects and no others were presented. A deeper dive into the Panoptix website, which would require downloading a "Doctor Discussion Guide" provides a description that more closely describes one of my issues:

"For the Clareon® PanOptix® IOL, some visual effects may be expected due to the superposition of focused and unfocused multiple images."

That may not be something one would fully comprehend the meaning of necessarily unless actually experiencing the effect after surgery. I did not discover that bit of information until eight weeks post-op. 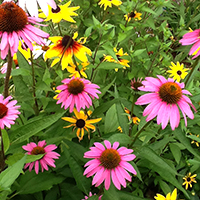 Although there is only one vertical purple line in the graphic on the left, I see four. The brightest one is the third from the left. This issue makes viewing images clearly, especially smaller ones on mobile phones, difficult to impossible.

Home :: About :: Contact
©2022 panoptixsideeffects.com
Although this is black text, it looks gray

This issue has been described online in numerous was - blurred text, text ghosts, text halos, shadows on text, etc. Most of these online references were discovered in user forums, not on PanOptix (or Alcon) websites.

Sometimes there is the effect of inner and out 'ghosts' on the letters as illustrated in the above graphic.

It is more dramatic, and harder to deal with when it is light text on a dark background - normal view on the left vs what I am seeing on the right.

Smaller images, much like smaller text, appear fuzzier with less distinct edges than larger images. Looking at an image on an iPhone can appear like a double or triple exposure but viewing a large screen tv not problematic. The actual edge of the tv itself though may exhibit a small ghost, thereby eliminating a sharply defined visual.